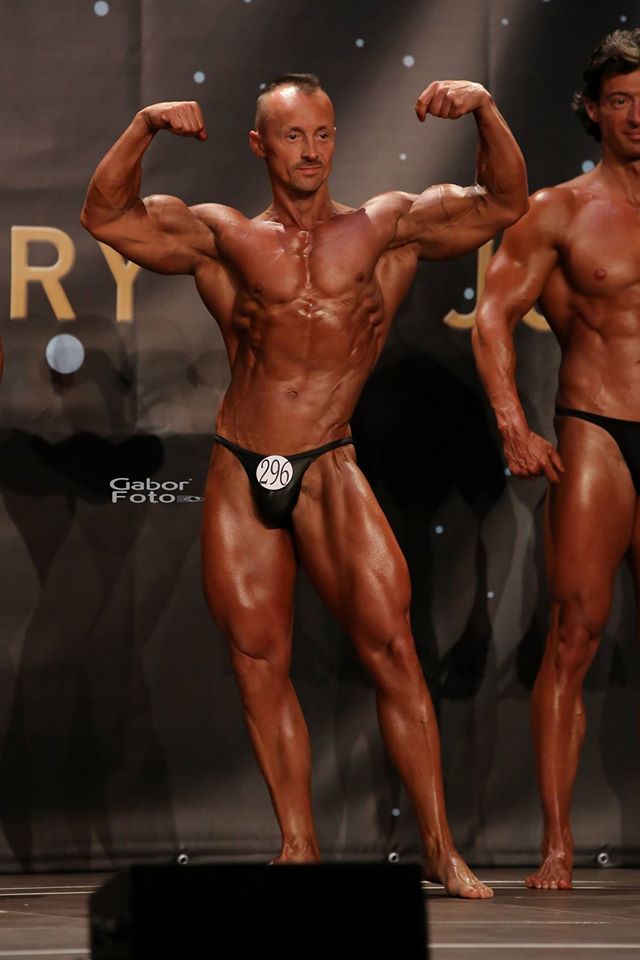 Basic rules of judges criteria of a natural bodybuilding for teens, juniors, men and masters

An athlete shows clothing for approval at the registration. Athletes must wear

uni-coloured swimwear. Any decorative materials shall not be used. Swimwear must be clean and free of advertising signs. The minimum height on the sides is 2 cm and it has to cover at least half of the bottom and the whole front. Using padding is prohibited

It is not allowed to wear shoes on stage, watches, bracelets, earrings or metal objects. Competitors, during their presentation on the stage, must not have chewing gum or anything else in their mouth,  must not use any props.

A supervisor (or a stage judge) lines the athletes on the stage according to their registration number beginning with the lowest number from the left side of the stage in a row (if necessary, in two rows). Athletes stand in the basic stance. Then they do quarter turns based on the head judge‘s instructions. Consequently,they are instructed to change the stance by  exchanging the numbered positions – starting with the lowest registration number from the right to the left and are asked to repeat quarter turns.

After finishing quarter turns, athletes approach  the judges according to their registration numbers, no more than five of them, to perform 4 mandatory poses.

Description of particular parts of the competition

Judging of the first round follows several criteria:

When judging the physique, an attention must be paid to the symmetrical aesthetic physique prefering the so-called ´V-taper´ – a narrow waist). We judge an overall appearance of a sport physique. Judgement is supposed to start from the head through a torso and continue downwards, the whole body must be taken into account. This judgement is supposed to start with the overall physique impression, taking into account the features of the face, the ratio of individual muscle groups, muscle development, state of epidermis and its muscle tonus. It shall be the presentation of a balanced symmetrical physique of an athlete, who acts confidently on the stage.

During comparisons of required mandatory poses, the first we judge, is a demonstration of individual muscle groups .Then the whole physique is judged –starting with the head, torso and each body part downwards. Judgement includes head, neck, shoulders, chest, all the arm muscles, linking pectoral with deltoid muscles, abdomen, waist, thighs and calves. The same applies to the back poses- upper and lower trapezius muscle, broad back muscle, teres major and teres minor and infraspinatus, erector spinae, gluteus, biceps muscles,thigh and back of the thighs, calves. Judges judge the muscular power of individual muscle groups to the proportionality of the body, muscle density, the definition of particular muscle groups, but not an extreme one, looking too shredded with inadequate dewatering (minus points)  and overall impression of an athlete.

Demonstration of individual muscles should not be crampy what is frequently performed by some athletes.The athlete‘s face should present confidence, showmanship and their pleasure of taking part in the competition. When judging the physique, tightness and tonus of epidermis should also be considered – skin is supposed to be smooth and healthy looking.

Judgement includes an athlete’s performance since their arrival on stage to the moment when they are leaving.

Athlete is facing the judges standing with feet slightly apart, arms are raised sideways and bent at elbow, fists are closed and turned down, which means biceps are flexed, which are the main muscle groups that are judged in this pose. Athlete tries to flex the frontal muscles, judges watch the whole figure. In mandatory pose, the judges first look at the particular muscle group. Then the judge judges the whole figure, they start with the head, through all muscles all the way down. They  start with overall impression, then volume of the muscles, their symmetry, mass and their lines.

Athlete is facing the judges standing with feet slightly apart, his hands in fist are placed on his waist and he flexes latissimus dorsi and also tries to flex his frontal muscles. The judges look for demonstration of developed latissimus dorsi and the athlete should create so – called ´V – taper´. Then the judges continue from head all the way down, they judge overall impression and then concentrate in detail on the individual muscle groups.

Athletes can choose his preferred side to demonstrate their better arm. He bends the arm closer to judges in 90⁰ angle with his fist clenched and the other hand clasping the wrist. Leg closer to judges is bent and propped with tips of his toes upon floor. Athlete expands his chest by the pressure of the bent arm and, at the same time, flexes his bicep. Athlete also flexes thigh muscles – biceps femoris , and with the pressure put on tips of his toes, he flexes the calf.

Athlete is back to the judges and raises his arms sideways and bents them as in pose “Front double biceps”, with his leg backward and the back leg on tips of his toes. He flexes muscles of his arms, shoulders, upper and lower back, thighs and calves. Arm muscles are judged first, then it continues with the whole figure. In this pose more muscle gorups are judged: shoulders, biceps, triceps, forearm, trapezius, all back muscles, gluteus, biceps femoris and calf muscles. Back double biceps give an opportunity to judge mass, lines and overall symmetry of muscles in more muscle groups.

Athlete is back to the judges with his leg backward and its toes on tips, hands are placed on his waist with broadly spread elbows. He flexes latissimus dorsi so he reaches its widest width, he also demonstrates flexed calf muscles. Judges judge the broadness of latissimus dorsi, its mass and the figure as a whole.

Athlete can choose his preferred side, leg closer to the judges is slightly bent, back leg is bent more, athlete is on his toes. Both arms are behind his back so the front arm can be flexed. Chest is expanded, abdominals are flexed and so are the thigh muscles and calves. First, triceps muscles and arm muscles are judged and it continues with thighs, calves and also an overall impression from the side.

Judges compare and evaluate at least two and no more than five athletes at a time. The head judge, on his own, can decide to reject or correct the individual requirements of judges for comparison. All individual comparisons will be placed in the center of the stage and in the order from the left to the right as required by judges. Each judge is eligible to submit at least one request for comparisons.

The best five athletes from the pre-judging round advance to the finals. They are led on the stage according to their registration numbers. Each competitor is introduced by his registration number and his name. Athlete performs  a posing routine accompanied by music of his choice. Posing routine can last up to sixty seconds. Time counting starts from the first tones of music, not from the start of posing. After a timeout, the music is stopped.

Posing routine is supposed to demonstrate muscularity , definition, overall impression of a posing routine, style and elegance, motion coordination and overall performance.Judges take into account the artistically performed and well- choreographed posing routine, which must contain required mandatory poses. Prohibited are stances completely lying on the floor, “moon poses” (bending over, bottom to judges) and pulling swimwear up exposing one‘s bottom.. The use of props is prohibited. While judging, posing routine and also physique, are taken into consideration.