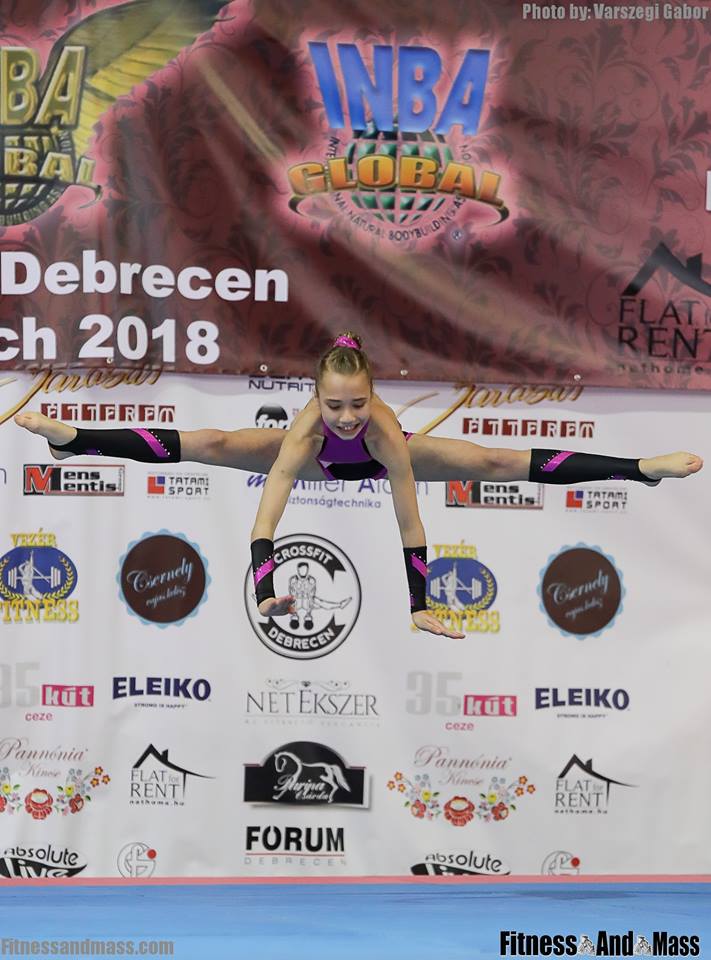 Valid: from 2017 until revocation

V.Groups of elements which from the routine should be combined

In fitness competitions evaluation is done by scoring. Apart from the most elborated set of rules, the subjective factors can not be completely excluded.

This rule book was made to assist you in objective judgment, help the competitors and coaches in  prepare.

The rules of the competitions were constantly changed and adapted to the development of the sport.

This is a 90-second practice which the competitor presents to his/her own music. In this round the judges appreciate coordinated movement, strength, stamina, movement of joints and loose muscles, as well as artistic effect and show-like performance. Fitness routine is compiled by a variety of sports: acrobatics, various types of dance, gymnastics, rhythmic gymnastics and aerobics, but only a certain percentage of these modes of movement are allowed. This gives the sport unique character and appearance.

2. The purpose of the competitions

•  promotion of INBA competitions,
• spreading a healthy lifestyle,
• conduciving the physical development of young people,
• the development of talents.

3. Structure of the competition system

For the I-II-III-IV-V-VI age group competitors, the competition consists of 1 round:

From the turn of routine.

The  age group VII (junior runners) competiton consist of two rounds, the turn of routine to music and body round ( in shorts, sport top and training shoes).

5. Participants of the competition:

According to the current competition announcement.

Online registration till deadline. There is no field entry. Entry fee according to the competition announcement. Only children and junior competitors who has a valid medical permit of up to 6 months old will be allowed to perform. She/he also has to present a properly completed membership book with a photo which was signed and stamped by the competitor and the president of the association. Adult fitness competitors are entered and recorded under the terms and conditions that are valid so far. They can start as an individual competitor, even if they are not members of an association or club.

In case of the registered competitors, the coach and the competitor is allowed to enter the competitors own age group or any higher, and every category untill the given date.

9. Award of the competition

The caward is determined by the organizers.

12. Publication of the results

After the competition, the competitor’s total score and placement must be communicated publicly.

At the round of the fitness routine:

• Multiple musical details can be mixed in case that its effect is not confusing,
• sound effects are allowed,
• music must be on pendrive or CD
• only one competitor’s music on one device
• recordings should be good quality.

The length of the routine is about 90 to 105 seconds, which starts with the first musical sound and ends with the last musical sound. If the music is longer than a 1 point reduction  is given by the time check judge.

• clothing must cover all critical parts of the body.
• At the “fitness practice” round, a competing garment is allowed that does not interfere with movement and in which movements of the body are clearly visible. Only supplies that do not assist in the technical execution of the items (springboard, podium are not allowed) can be used.
• Using prohibited supplies will result in 1 point deduction from judge.
• In all rounds where the competitor’s clothing differs from the rules, 1 point is the referee’s deduction.

• If a turn does not appear 30 seconds after the competitor’s call or, for some reason, does not finish the round, it must be evaluated as a missed turn. (0 points)
• Exercise can be evaluated if the contestant interrupts but leaves the competition area and continues to practice while at most 2 x 8 music phases. The deduction in this case is 0.1 to 0.5 point per artist per judge, depending on the length of the interruption. (If you leave the competition area the value of the practice is 0 points.)
• If a competitor scored 0 points in the race, he will not be able to qualify for the upgraded race system even if the number of competitors would allow it.

Complaints about scoring and results are only accepted with realistic and reputable feedback (comparative video between two competitors). The competitor may discontinue his or her own practice if the following conditions are met:

• Inappropriate music from the studio’s fault,
• general mounting error (stage lighting),
• if the music is interrupted by the studio.

With the Judiciary permission, the competitor is going to restart her own’s practice.

. Evaluation of the competition

• Each tournament has 6 judges awarded by the director of the competition and the chair of the INBA EUROPE Children’s Physical Section.
• The existing aspects of the INBA rules are guiding

A competitor must be warned if:
• misbehaves in or outside the competition area,
• demonstrate sportless behavior,
• acts with disrespectfully to judges and officials

The competitor must be excluded from the race after a single warning.

The competitor must be excluded if his/her coach or companion shows an unsportsmanlike attitude in or out of the competition.

A warning may be formally issued by the Referee.

IV.  A scoring of practice

• Strength: min: 2 sec endurance.
• Acrobatics:- minimum must have a firm front and end,

–  contain a dynamic acrobatic diagonal line of 2, up to 3 elements (required).
• Gymnastic jumps: dynamic jumps, rotation on an axis with a stretched body.
• Laziness: the angle between the legs must be at least 170º.
• Presentation of at least 3 elements of each group of elements, totaling 12 pieces.
• The distance between the chest and the ground should not exceed 15 cm.
• A split on floor, a distance of up to 5 cm between the ground and the foot (can not be seen below)

Recommended composition of the practice:

• music use
• land use
• performance, show

Music selection and music use is an essential part of practice.
The music is in harmony with choreography, for example, jumping on high tones.
The style of music matches with the competitor’s dress and style.

Artistic effect judges appreciate the efficient use of the competition area.

Important is the number of eight steps and paths, placement and balance, and spatial forms.

Requirements: the ability of a competitor to transform his/her choreography into artistic performance with the appropriate gestures of his age group. Be creative and unique. Logic-built alternatives in the job, soil and flight phases during the exercise.

• winning the audience
• be captivating
• feel the connection between choreography and music, be able to share it
• a performance that harmony with the style of music
• mingle with music, with every gesture and tune of expression, express the relationship with the music and understanding the music’s message
• Presentation which resembles age and individuality
• lightness
• starting pose is important
• The competitor must be present the elements with maximum precision and the transitions and the linkages. In duo, trio and team exercises, the raise and partnerships score.
• The competitor close the choreography to create a full round sensation, in the end it is important to have an end pose
• for some style, displaying the main style of music in choreography
• the correct choreography for the age and individuality of the competitor
• the relationship between choreography, dress and music
• every move should reach its maximum extent
• every move must be finished before strating the next one
• continuity
• one move should follow the other logically, without any discontinuity and the chain of movements should affect the whole choreography

In duo, trio and team categories, two raises are required during the routine which could also be included in the starting and the ending positions either. Violence, racism, religious and sexual content are not accepted.
Attention must be paid to quality, expression and partnership (duo, trio and team)

Artistic Judge: – rates the choreography of the routine, deducting points, starting from 10.

Technical judge: – here the judge evaluates the technical execution of the movements. Each movement must be executed with maximum precision and without any mistakes including hard elements,the continuity of the choreography , conductions between the movements, partnership and raises as well as synchronization in duo, trio and team routines.

The technical judge rates the choreography of the routine, deducting points, starting from 10

The difficult element judge: –  rate the uses of the elements

The competitor must move in all three dimensions, and in practice, the elements must be selected to reflect the various abilities proportionately.
Choreography should reflect the competitor’s best physical abilities and talent as a performer, conceal any deficiency.
The routine should be complex, varied, creative and intense.
The elements of the 4 groups are listed by the difficulty.
The technique of the difficult elements gets rated by the execution:

The point here is that there are deductions for improper execution, such as: the position of the split is not at least 160 degrees.

In the event of a tie in the I-II-III-IV-V-VI-VII.  age group, the competitor with the best technical score is the winner, if the score is still the same, the artical points must be taken into consideration. It is better for the competitor to compose his/her routine from the most valuable elements because the content score is higher, but care must be taken for proper technical execution.

V.Element groups from which the practice should be composed.

• High foot flings
• 360 ° turn in tiptoe
• Bridge
• Split (horizontal, forward)
• Arabesque (above 90 degrees) – front, side, rear
• Sideward arabesque
• Standing split
• Landscape split
• Foot lift in bridge up to split
• Landscape split with 360° turn
• High foot flings in standing, tilting till split (forward, side, back)
• Sliding split
• Trunk wave standing up in toes
• From a corner seat lift up in toes with trunk wave till standing
• Illusion
• Trunk flexion to rear arabesque position
• High leg lift with foot hold up to split (forward, side, back) in sole
• Split balance
• Forward arabesque with foot hold till split
• Standing in split  without foot hold
• Back trunk flexion in balance split position
• In prone postion lift one foot to back with leg hold to the split position overhead
•Side arabesque without leg hold, to split position
• Standing split in tiptoe 3mp, or with 360° turn
• Side arabesque with foot hold in tiptoe
• Standing leg lift in any direction with foot turn , turn on tiptoe.
• Rear arabesque with foot lift in tiptoe
• Foot grip in a standing split, side inclined

Combinations of the elements

For duo, trio, and teams, the age of the oldest member counts. We wish every contestant a successful preparation and great results at the INBA competitions! Rules not covered by this regulation will be subject to the decision of the INBA GLOBAL Alliance and compulsory to accept by all contestants.