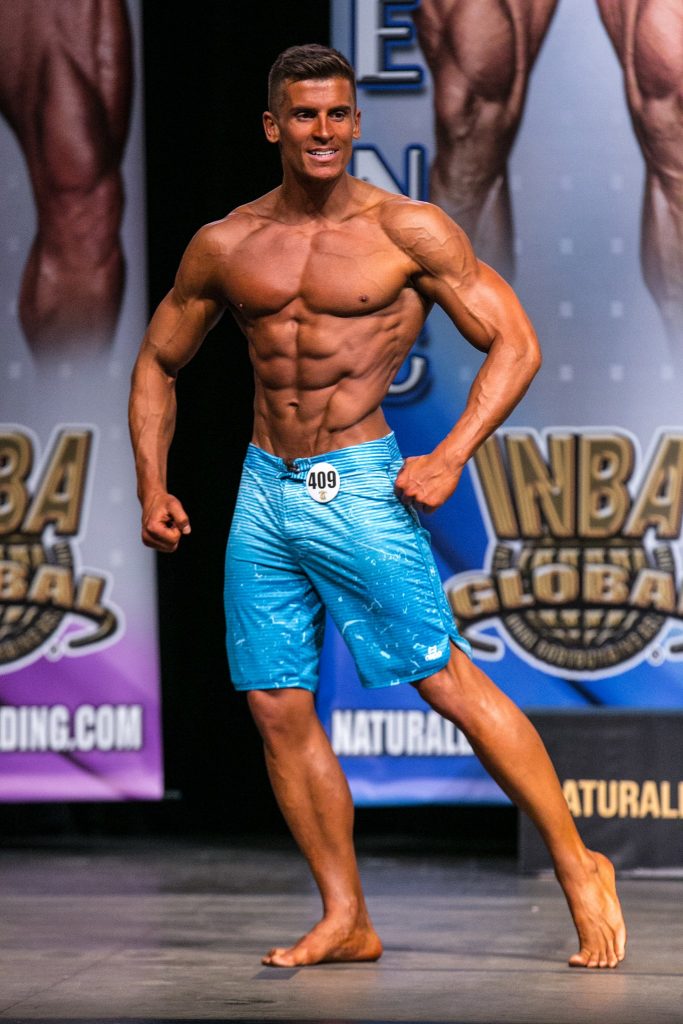 INBA Hungary: You were first seen in this organization in 2018. Why did you want to compete and why did you choose INBA?

Being involved in athletics were always a part of my life. I used to swim as a kid, then joined to the local kayaking and wrestling club at the same time. In the past six years or so I started to play american football and I am still active in it. Besides these I started to workout in a gym regularly since the age of 15. In late october, 2017 a thought came to my mind to prep for an upcoming physique show. I wanted to compare myself to other physique competitors so I had a very short 3 weeks of prep before entering the contest. I did pretty good, placing 4th out of 14 or something like that. I got motivated so I decided to do a full length prep for spring 2018. I decided to compete with INBA because I stand for competing naturally, refusing taking banned substances.

INBA Hungary: Your first year went pretty good for you. Did you expect it, or were you surprised?

Before the hungarian grand prix, I analized the past competitons in men’s physique to see my opponents, their advantages and disadvantages. Based on it, I expected me placing somewhere at the front. Unfortunately, I made some mistakes on stage, therefore I only placed 3rd so I was a bit disappointed because I knew I should have placed better. I was able to fix these mistakes by the time the Elite Tour Hungary took place in early october and I won the show. Two weeks later I won gold at the European Championships so I decided to fly to Vegas for the amateur Natural Olympia were I was able to win 1st place as well.

INBA Hungary: Next year, in 2019 you raised the bar higher and only targeted pro shows. How did it go and what were your experiences?

The successes on the amateur level were nice but I knew there is a level above it and since I like challenges I wanted to compete against the best guys in the game. There is a big gap between amateur and pro. The World C’ships in Greece in June did not go the way I wanted and there were two reasons for it. One of them, I think my head got I bit big after winning everything in 2018. I thought I will have an easy path to gold here as well. Although I did put in the work I needed in the gym, I did not do my best with dieting. I cheated way more than I should have. 5th place. Big disappointment. I had to realize and learn from my own mistakes that just like in everything else, it can only be done with being humble towards the sport and towards all my opponents. Second reason, I torn my ACL shortly before the show and I had to continue my prep with an injured knee. Injuries like this one can take away your energies and all competitors know there is not much energy left in you anyway when you cut on your nutrition, water, etc. By the time the pro Olympia took place in November, I was able to fix my mistakes and stepped on stage with a massive 21-week diet and prep. I did not make it to the finals, I was only able to finish on top of the second callout which means about 10th or 12th place. I was not disappointed. I brought my best physique ever. I did my best I could, unfortunately, as a true and honest natural competitor, this was not enough in this lineup.

INBA Hungary: It sounds like 2019 did not go the way you wanted… What’s next? Are you going to keep competing, maybe switching to anouther category?

This year I won’t be competing. I want to take some rest. In the past 2 years I cut weight 8 times which is a lot for the body. This year I only wanna focus on american football. Unfortunately my entire last year went to waste due to my knee injury. Maybe in the future I wanna prep one more time for Vegas. I feel like there is more in me than a second callout… I don’t think I would switch category, I think men’s physique stands the closest to me.

INBA Hungary: As we know, you prep differently to your shows than most of the competitors…

That is right. I do ketogenic diet during my preps. While the majority of competitors keep their carbs and protein high and fats low, I keep my carbs as low as possible, sometimes going for days on 0 g even weeks before the show and also keep my protein ont he minimum and fats up high. While the majority eats sometimes 6-8 times a day, I only eat 3 times maximum, only 2 times a day every other day and I do a full 24 hour fasting in every 5th day. It is an interesting topic to talk about.

INBA Hungary: Is there a „perfect method” to prep, cut water etc.?

There is not. Everybody uses different methods. Your method to prep might not work for me and vice versa. The method that worked for me last year might won’t work for me either next year. This is something that needs to be experimented for everyone themselves. For instance, I competed 9 times total, but I am still looking for the best way to cut water before the show.

INBA Hungary: Do you train or coach others?

I had people asking me to train or help them with their prep before, but so far I turned down almost all of them except one due to my tight schedule. However if someone would ask me in the future, there is a chance that now I would accept them.