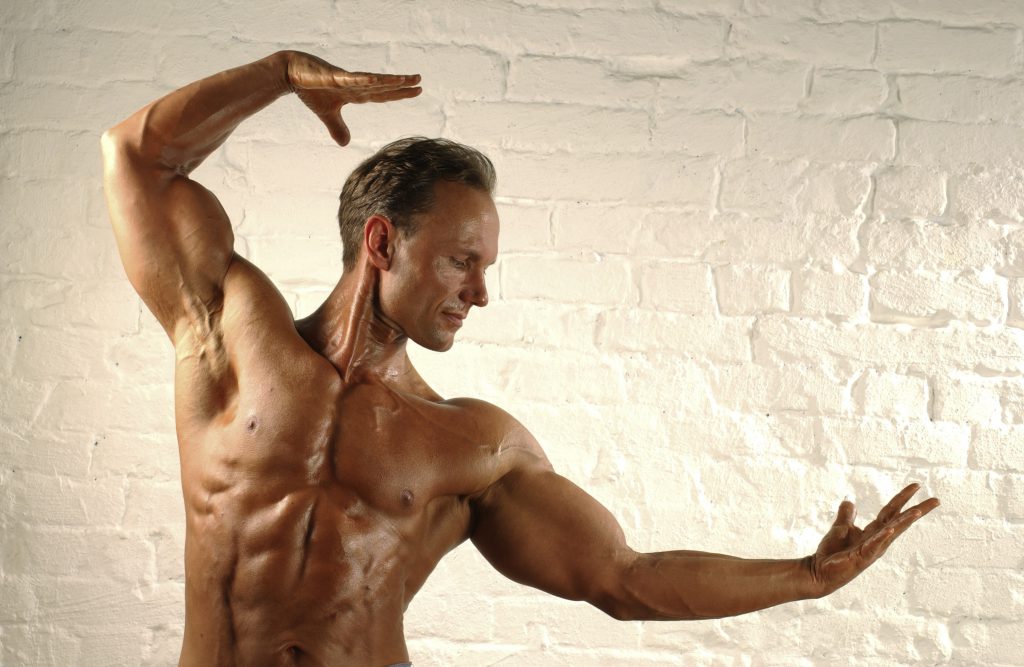 How did you get to bodybuilding?

u201cWhen I was 13 years old in the year 1977, I admired the muscular physiques of Comic-Superheroes like Spiderman and Batman. In one issue of Batman-Magazine there was a picture showing him training with weights. So I thought: u201cHey, Batman got his muscles from lifting weights u2013 that`s what I have to do to develop a muscular physique toou201d. I started training at home with one barbell and two dumbbells, later added a multiple angle bench. With 14 years of age I joined a GYM and when I was 15 I entered my first Contest, the u201cMr. Hamburg Junioru201d 1979 in which I placed 5thu00a0out of a field of 6 competitors in the age division up to 21 yearsu201d.

Why did you choose natural bodybuilding?

u201cIn the GYM where I trained were some fellow weightlifters who admitted that they took steroids to grow big and strong. This was impressive to me as a kid, BUT I saw the side effects in reality of which those people suffer. One guy got extreme nose bleeding while working out, the other had steroid acne all over his very muscular back and another one went mentally wild, screaming and yelling at a young trainee who occupied u201chisu201d flat Bench. Also I read a lot of Bodybuilding-Books and medical articles (my grandma was a physical doctor) and there were many warnings against the usage of anabolic steroids. Drugs were never an option for me! Not only I found drug use unfair sportsmanship but was also worrying about my health. Therefore I am a lifetime drug-free Bodybuilderu201d.

What do you think of when somebody says u201cnatural bodybuildingu201d?

u201cThis makes me feel great. Natural Bodybuilding is not just a Sport, it is Lifestyle committed to physical and mental health. Natural Bodybuilding teaches self-discipline and from my point of view also to respect yourself as well as other people. As a Natural Bodybuilder I am able to enjoy life to its fullest. I am very humble that I was never seriously ill during the 52 years that I am alive until todayu201d.

What do you consider to be your achievements in natural bodybuilding?

I have written 21 books about Natural Bodybuilding which sold over 200.000 copies all over Europe, and I even published one book in English language u201cBodybuilding. Successful. Natural. Healthyu201d.

In addition I was Editor in Chief of the German Magazine u201cNatural Bodybuilding & Fitnessu201d for 4 years until the publisher decided to sell it no longer because of economic crisis in the field of print magazines.

In 2003 I founded the GNBF and I am president of this fast growing Natural Bodybuilding Federation since the very first beginningu201d.

Where would you like to see this sport in future?

u201cIt would be great if more and more people recognize the wonderful effects to the mind and body our Sport have. I am sure this will happen. Natural Bodybuilding will get even much more popular in the futureu201d.

What advice would you give to people who would like to start with bodybuilding?

u201cGet yourself a good introduction in doing the exercises with perfect technique. This is important to avoid injuries. Train hard. Put your inner being into each set of each single workout. Feel the muscles contract and stretch while you are doing your sets. Get the mind muscle-connection, even this can last a little bit. Avoid overtraining. Do Cardio too. Cardio is important for a healthy heart and helps a lot in controlling Bodyfat-levels (especially when done sober at early morning). Finish your weight lifting sessions with some stretching movements for keeping flexible.

Take care of your nutrition. The food you ingest has a big impact regarding your success as a Natural Bodybuilder. Eat every 2,5 to 3,5 hours and avoid junk food most of the time. Get aware of the reactions of your body shows after ingesting carbohydrates, protein and fats. Some people can digest a lot of carbs without getting fat, other have to be very careful in aspect of carb intake.

Get enough rest and recuperation from hard workouts. Muscles grow when they rest.
Finally, be thankful that you are able to train! Enjoy your workouts and find out to what training system (i.e. volume or Heavy Duty) your body responds best. Become a Master of the u201cInstinctive Principleu201d.

Sportsmanu00a0u2013u00a0Manuel Neuer (Goalkeeper of German Football Team). He always acts very professional at games of German Team and also when he gets interviewed.

Sport besides bodybuildingu00a0u2013u00a0Jogging through the woods at early morning.

Foodu00a0u2013u00a0Clean. My body favorites high protein/low carb nutrition with some healthy fats added like Salmon or Flaxeed Oil. I am no vegetarian nor a vegan. Red meat is one of my favorite foods.